The nose is partitioned in the middle by the nasal septum, dividing it into two nostrils. The nasal septum is made of cartilage and bone.

Sometimes, due to injury or simply because it has grown that way, the septum may be bent, buckled or deviated to one (or both) sides, causing blockage by reducing the area available for air to flow through. The operation of Septoplasty is used to correct this abnormality in order to allow air to pass through either nostril more easily. Septoplasty is a common procedure and is not very painful.

Few adults have a straight nasal septum, but only if the deviation is significant and interferes with normal breathing will surgery be considered.

The aim of the surgery is to improve the airway. The size of nostrils are not 100% equal. This together with the memory nature of the septal cartilage make it impossible to make the airflow exactly the same through both nostrils. 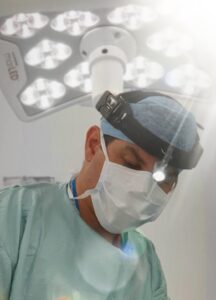 The procedure is usually performed internally, through the nostrils, without the need for external scars. Rarely when septum is severely deviated your doctor may perform and external septoplasty. This is an approach to perform septoplasty operation with a greater surgical exposure via a small incision in columella ‘skin between two nasal holes.

Nasal packs are occasionally inserted into nostrils to prevent the build up of blood between the cartilage of the septum and the lining.

There are no black eyes after the surgery and the outward shape of the nose is generally unaltered. Septoplasty takes about 30-60 minutes, depending on how badly bent the septum is.

Please note that the details in this section are for general information only. You should always discuss the risks, limitations and complications of your specific operation with your surgeon.

Make an enquiry for Assistance

Fill up the Form and Ask Your Queries